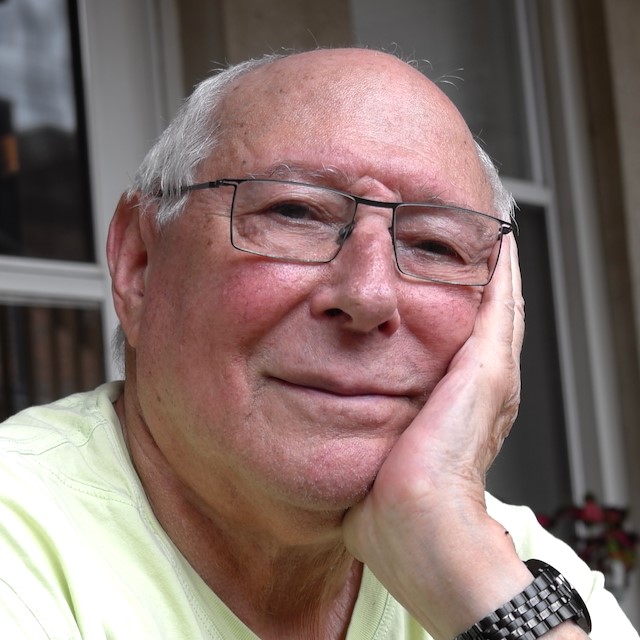 Alan “Jake” Jacobs, 87, passed away peacefully on July 30, 2022, from complications of COPD. Alan attended the University of Chicago, where he also became a famed sprinter and was inducted into their Athletic Hall of Fame. He received numerous track awards and was once called “the world’s second fastest Jew” when he finished second in the 1957 Maccabiah Games. His career as a psychotherapist brought recognition as the 1996 recipient of the Eric Berne Memorial Award in Transactional Analysis for Theory from the International Transaction Analysis Association. Alan was also a genocide scholar with H-Net and has worked closely with the Auschwitz/Birkenau Memorial and Museum to produce a visual photographic tour of the concentration camp. In retirement, he became a passionate photographer. His photography book "Thank God For These Guys" is a culmination of many years of work with the Chicago Fire Department to document their bravery and service. Alan was preceded in death by his parents, Harry and Rose Jacobs. He is survived by his wife Krysia Jacobs, his son and daughter-in-law Jesse and Olga Jacobs, and his grandson Max. May his memory be for a blessing.

We encourage you to share your personal condolences and stories of Alan "Jake" Jacobs below and we will share them with the family.
I am so sad to hear that Alan is no longer with us but I will continue to share his work with TA students.

August 3, 2022
Krysia, you completed Alan...He loved you so; always said you were the better half!
Jesse ,Olga, and Max...He was very proud of you.
I wish you all peace.

I am so sad to hear that Alan has died. He made a significant contribution to our awareness of power and social justice. His work will continue to be recognised by the many students at The Berne Institute and in the TA community worldwide. May his dear soul rest in peace. I wish his family long life.

August 4, 2022
Alan was a gem! He was passionate, funny, fierce, loving, smart and wise. I can hear his laugh! He made the world a better place and I am grateful for having known him. Love to all of you who now grieve.

August 4, 2022
I’m saddened to hear of Jake’s passing. I was a brand new firefighter in Uptown when he came to our firehouse after 9/11 asking to photograph us. I remember him explaining that he wanted to do something for us in honor of 9/11 and that he had hoped to put together a picture book showing firefighters at work. So he spent hours and hours with us, and many other fire companies, over several years learning our job and photographing us at work. I’ll always remember Jake, and the time and effort he voluntarily put forward to understand and promote our profession. Although I had not seen him in many years, I can still remember some of our conversations at the firehouse and that he was just a genuinely nice man. I’m sure he’ll be missed by many but I have no doubt he has indelibly left his mark upon those who knew him and the world through his work.

August 4, 2022
Jake loved to learn and share his wide knowledge and experience with others. Over our dinners in restaurants, home, and via Zoom his love of his family was obvious. He was proud of Krysia’s talents and accomplishments, both practical and technical, that made his life more interesting and independent. Plus, for Jake there could be no grandchild brighter than Max.

Our granddaughter, Emily, also recalls the times she shared with Jake, and his book, “Thank God for These Guys,” and his stories of the firefighters.

Jake was a great person and an excellent neighbor. Our thought are with you, Krysia.

August 5, 2022
Jake was kind, funny, talented and had interesting stories that showed his passion for life. He loved and was extremely proud of Krysia and often referred to his grandson as a genius. I consider it a huge honor to have known and worked with you Jake.

August 5, 2022
Dear Krysia and Family,
We've been touched by beautiful service for Alan, he was a remarkable man. Sending you sincere condolences and may his be a blessing.
Love and best wishes from Marta and family from Sydney.

What a loss, Alan "Jake" Jacobs!
I first saw Alan Jacobs when he was running an indoor track meet at the University of Illinois (I was 8-10 years old)...it must have been right at 1954-55-56. This meet was held in the famed Armory on campus, just a few blocks from my home in Champaign, Illinois. He was running against Ira Murchison & both were teammates at the University of Chicago...Ira woon that meet barely...Alan always said Ira was the toughest sprinter he ever ran against...for good reason...Ira went on to Olympic Gold Medal 4 x 100 yard relay team for USA in the 1952 Olympics, in world-recotrd time...later Ira went on to set the world record in the 60 yard dash 6.1 seconds.

I share all this because, Alan was always a close 2nd to his teammate, and a world-class sprinter himself.

When I met Alan at the March 1975 TA Spring Conference hosted by Vann Joines & Graham Barnes in Chapel Hill, NC ...I introduced myself and told Alan that I was at that meet and always remembered how close that particular race was...we had the best time talking about his sprinting prowess...Alan "Jake" Jacobs was one fast
dude!

I would see & meet with Alan on several other ITAA Conference occasions over the years...he was always such a nice, fun, friendly beacon of brightness to me and with anyone around him.

I learned a lot from Alan...TA, psychotherapy, per se, life lessons, how to always value & treat everyone in a kind & respectful manner.

Alan Jacobs was a person I looked up to and admired for so many good & important reasons...I will carry those feelings & memories about Alan in my heart always.

ITAA, USATAA, and the world of TA & Psychotherapy lost a Champion when Alan left this world at age 87, July 30, 2022. I was hoping to hear Alan as part of the recent zoom/phone hookup by USATAA, hosted by Felipe Garcia & Abe Wagner...someone said he had planned to be with us. It just wasn't to be.

May his family, friends, patients, clients, students, & peers feel his spirit riding with them always...he's still in your hearts, as he is in mine.

RIP, Alan...you made me a better person...you made the world a much better place.
Most sincerely,


Sincere condolences to you and your family Krisia. The first time I heard your name was many years ago when Alan and myself would have hour long runs before TA conference (what an honor to run with a six time world record holder) —between gasps of fresh air he joyously said he met a woman that he adores—that was you ;the rest is history.
He was a giant in TA’s “golden era” and his heartfelt study on genocide will live forever !